You’ve heard it plenty of times, for blog posts long form content is the way to go. In the recent years blogs have been shifting to longer and longer content.

You may be wondering why that is the case though, what’s the point in writing over 2000 words or even higher?

Some of you may even be thinking that many words are too long to bother reading, and keeping it short and simple is the way to go.

HubSpot would disagree with that though; in HubSpot’s 2017 study they found their blog post sweet spot was 2,250-2,500 words. 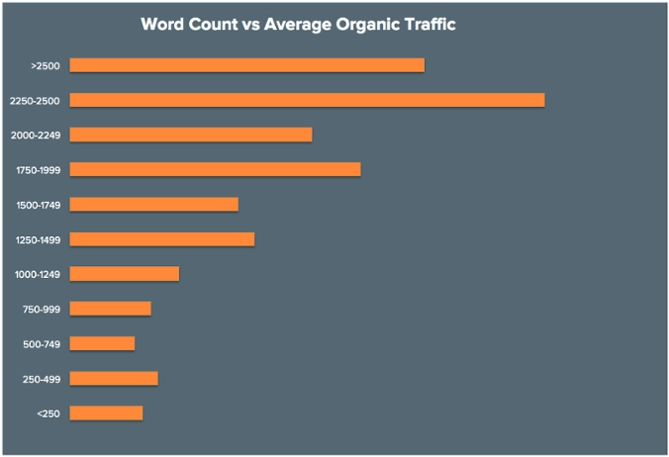 What does this graph show?

Their research indicates that a word count of between 2,250 and 2500 words had on average the highest amount of organic traffic.

How did this happen?

Blog posts used to be a lot shorter, it felt like everyone was trying to machine gun out less than 500 word posts to rank well for particular keywords.

Now the landscape has changed, and this was from an update Google made a while back.

What did this do?

To keep up with the algorithm changes and retain their ranks blogs had to start writing longer content.

This led to the situation we see now where bloggers are writing longer blog posts.

It’s all about the long tail keywords

So why does long form content perform so well? Who does it cater towards?

Long form content caters towards long tail keywords. Long tail keywords are a combination of keywords that make up a very specific search such as “Why you should write 2000 words” or “How to pan fry an egg with no oil”.

In a study by WpBeginner on long tail keywords, they found that 70% of all search queries comprised of long tail search terms. 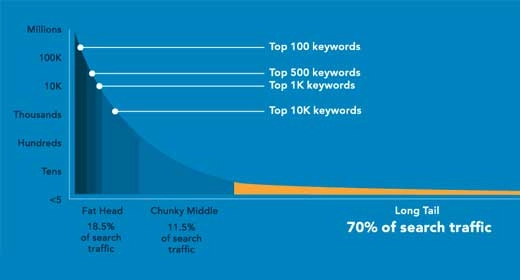 So using what we know, the vast majority of people are asking specific questions to Google and expecting specific answers.

This is why long form content is so good, it’s perfect for answering specific questions in depth.

By answering these specific questions in depth you also position yourself as an authority on the topic.

Long tail keywords are typically less competitive then short, vague keywords as well. On average, less people will search for a specific long tail term over a more generic term, but less people are competing for the specific niche meaning it’s easier to rank at the top.

The traffic that comes from a long tail keyword is generally better quality and more predicatable as well.

If someone searches for “shoes” they could be searching it for a menagerie of reasons, but if someone searches “where to find Nike shoes in the Colorado area” the kind of visitor that visits your website and what they want is a lot easier to anticipate and tailor for.

What do the results say?

So we’ve established that Google seems to favour long form content, and the ideal word range for organic traffic is 2250-2500 words.

How is this reflected in the search results?

This is pretty close to HubSpot’s ideal range, but you may be wondering why it sits lower.

The answer is that not all pages that rank first are blog posts or other types of pages with a lot of content.

A lot of them would be home pages, product pages or product category pages which often don’t have too many words on them.

This is because the goal is to still serve the most relevant page for what the user is searching, and that isn’t always going to be a detailed blog post.

Don’t always try to write over 2000 words on every page, for some it’s just not applicable. You wouldn’t have a 2000 word spiel about contacting you on your contact page.

What’s the average amount of words in an article?

You may be surprised to find out that a lot of articles are still very thin on their content.

Despite the Google Panda update, many blogs continue to push out articles that are less than 1000 words.

In a study by Moz 4 years after the Google Panda update, they found that over 85% of articles had less than 1,000 words.

That was in 2015 though, there isn’t much data publicly available about the current average word count of blog posts but I would expect the percentage of articles with less than 1000 words to have reduced.

Despite this, I still expect the majority of articles published are less than 1000 words.

Marketers and SEO bloggers push themselves to write over 1000 words, but the average Joe blogger still writes only a handful of paragraphs per blog posts.

And that’s okay! It’s not ideal for them, but not everyone’s blogging to get themselves on the front page of Google.

This does contribute to the overall metric though, which is why the average amount of words in an article is much lower than our 2000 words targets.

What are the benefits of writing over 2000 words?

In the Moz 2015 study analysing 1 million articles they found that long form content gets higher shares and links on average than short form content.

HubSpot wasn’t the only one that found that writing over 2000 words benefited organic traffic either.

In a blogging survey by Orbit Media they found a direct correlation between the length of a post being long and self-reported “strong results”. 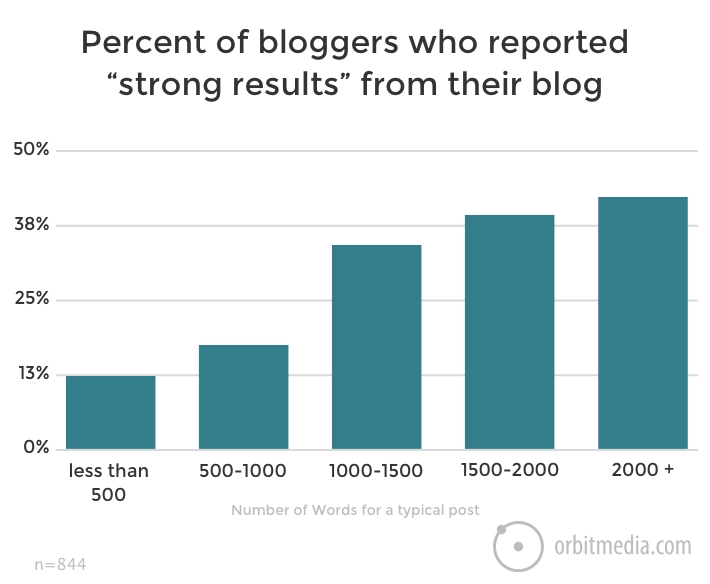 This indicates that as a general consensus, bloggers typically see better results from longer posts.

Does writing over 2000 words benefit my conversion rate?

Writing over 2000 words doesn’t only benefit how many people you reach; it also can help your conversion rate as well.

Longer articles on average convert a higher percentage of visitors than shorter content.

Highrise split tested this with their shorter page as the control and a long form design as the experiment. 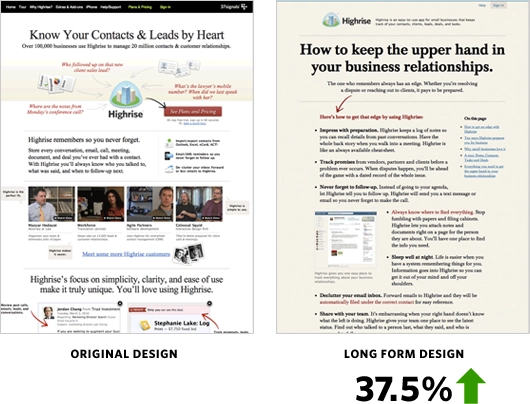 They found that 37.5% more people signed up with the long form design.

This indicates that longer content does help to increase conversion rate.

People have more to engage with when the content is longer, and longer content positions you as an authority better to help influence visitors to feel confident in converting.

I wouldn’t take this as a blanket rule for all pages though. Using the example we discussed earlier, putting 2000 words on your contact page isn’t going to be improving that page’s conversion rate.

Sometimes it’s better to just get to the point of the page.

Ask yourself where people should be coming from and what they want to do to decide whether to go long form or short form.

Another discredit to the conversion rate claim is that this is only one example, but others have tested and found similar results as well.

Crazy Egg also ran a split test, with the control as the short form and the challenger as a page almost 20 times as long.

They found that their challenger outperformed their old page by 30%.

What I particularly found interesting from this study was the following quote:

They ran this experiments on the homepage, generally I’m an advocate for keeping homepages short and simple but in both of these experiments they show that not only does longer content perform with a higher conversion rate, but perhaps that this also stands true for the homepage if done correctly as well.

For blog posts it’s not really applicable to split test the same post, you’re better off just comparing two posts of different lengths and seeing how they perform for yourself.

Although, if you’re looking to try making your homepage long form content as well, I would recommend split testing the change and figuring out what converts best based off your findings.

Their appears to be enough data to assume writing longer content in articles will increase their conversion rate, but other types of pages need to be tested more thoroughly.

I remember in High School finding it near impossible to write 500 word essays, we’d be given weeks to write anything over 1000 words.

If I knew what I know now though, I could do it one afternoon easily.

It takes me about 4 hours to write a 2000 word article, which equates to 500 words an hour and roughly 8 words a minute.

I actually consider that slow, as I know plenty of other bloggers that can knock out an entire 3000 word article in 2 hours.

None the less, I’ve picked up a few tips on how to write large articles in a relatively short period of time and once you get the hang of it, it’s pretty easy.

Just do the following and you’ll find it a breeze too.

Choose a topic that you can write a lot about

If you’re trying to write articles on something you know nothing about, you’re going to have a tough time.

If you’re trying to write 2000 words or more on a topic, you need to know a lot about it so that you have a lot to write about without wracking your brain for how to stretch points out or reiterate on the same thing over and over again.

If you don’t know enough about what you’re writing, but you have to write about it anyway, it’s time to study up! Read other articles about the topic, learn cool facts, talk to an expert.

You don’t have to be an expert about it beforehand; you just need to know enough for when you start writing about it so the words flow much more freely.

Another factor in making writing large articles easy is planning out 10-20 points. Points can be facts, arguments, tips or whatever else makes up the core of your article.

How many points you should plan out exactly depends on how much you’re going to write for each point. I plan out about 20 points on average because I expect to write 100 words a point, but often I find I write closer to 200 words per point so as little as 10 points can make up an 2000 word article.

Split it into headings

This isn’t so much for you as it is for your readers.

By splitting your article out into headings, it makes it easier for skim readers to pick up the short summary of your points or locate the specific piece of information they’re trying to find.

Aim to make your headings cater towards the skim readers by making them like a tl;dr (too long didn’t read) version of what it encapsulates where possible.

Another way to cater your headings to skim readers is phrasing them to reflect what they’re trying to find, such as the heading “What are the benefits of writing over 2000 words?”.

This is probably the most important point in this entire article.

Maybe it’s because you said everything about the topic already, perhaps it’s just not your writing style to make long articles.

When you have covered everything and there’s nothing more to say, you are done writing, regardless of the word count.

If you continue writing, you’re just going to be padding out the good stuff with useless garbage, and that’s going to produce much worse results than just leaving it as a short article.

That doesn’t mean you should give up writing long articles though, for a lot of people it’s just a matter of practice and slowly working your way up to a higher word count.

There’s definitely plenty of reason to write articles over 2000 words.

It benefits your SEO, gets your more links and shares, and produces a higher conversion rate.

Don’t force yourself to reach the word target though, quality will always trump quantity.

What’s your opinion on long articles?

How to Position Your Business with One Important Statement

How to Avoid Your Chatbot Getting Banned from Messenger

The 5 Most Important Steps to Designing a Chatbot